Religious pluralism is a strange ideal.  It’s a beautiful ideal, envisioning a world where people of dozens of creeds can function peacefully alongside each other.  It’s a fine practice, bringing massive benefits to societies as diverse as Poland, the United States, Lebanon, and India by calling in the dispossessed and unwanted from miles around.  It’s an intriguing intellectual event, forcing very different perspectives to achieve at least a superficial understanding of one another.
It’s also borderline incoherent, because religions do not get along.
Religions do not present comfortable contradictions.  Every one of them is, in part, a hypothesis about the deepest movements and functions of the universe and the place of humanity within it, and to a first-order approximation every one of them contradicts all of the others.  When the shamans of central Asia send prayers to Tengri the Eternal Blue Sky, their language makes no allowance for what Quetzalcoatl, Ganesha, YHWH, Nanabush, Elohim, Kim il-Sung, the Rainbow Serpent, Xenu, or the Flying Spaghetti Monster might have to say about their efforts.  Jewish metaphysics includes a lavishly detailed demonology from which many fantasy games and books borrow, but not a Hell of eternal punishment.  Islam defines the Yazidi deity Tawûsê Melek as the same as their Shaitan or the Christian Satan, a conflation the Yazidis find deeply insulting.  Hinduism sets the universe’s highest reward as extinction of the self in union with the grand substance of the universe, a state in which one would be hard-pressed to enjoy the attentions of 72 Muslim virgins.  The partisans of Huitzilopochtli needed to feed the sun’s daily motions with the bloody hearts of thousands of human sacrifices, a feat that sets them sharply at odds with the familiar axiom “thou shalt not kill.”
Every one of these groups and the thousands of others that are, were, and will be has to find an answer for the majority of the human race that doesn’t feel the same obligations.  How do Buddhists feel about those so filled with the emotional verve their religion deplores that they would convert others by the sword?  What does it mean to the followers of Juchethat not everyone bows to the guidance of the Great Leader?  What do Scientologists think of those who do not fear Xenu and his Thetans?
How do Christians parse the majority of the world that does not swear allegiance to their carpenter prophet?
Many liberal thinkers, foremost among them the theosophists, see here a smorgasbord of possibility.  Amidst all of this difference are dispersed dozens of good ideas, and the “truest” or “best” practice is to find and employ them all, whatever their source.  But to even consider this is, to many faiths, itself a heretical, forbidden thought, and the act an unforgiveable blasphemy.  And absent the web of religious thoughts that make nowruz or yoga fit within their native frameworks, the worldview that holds them both alongside Christian or Muslim theology becomes itself a new religion, contradicting the precepts of both sources.
Others disavow the evangelical arm of their faith, if there is one, and declare that Christianity or Buddhism or Asatru is right for them and the world’s miscellany is right for them.  This unwholesome kluge requires them to either reject or leave as contradiction their religion’s claims about the nature of the universe and the actions of their supernatural patrons.  If indeed one must confess their sins to a Catholic priest to avoid an eternity of torment, how does one countenance those who instead visit babalawos or rabbis?  What could stand between those who honestly believe that they are doomed to burn or marked as “bad people” if they do not avoid red meat on that one Friday  and attempting to spare the South Sudanese animists from this gruesome fate?  Could something as small and momentary as politeness, as mutable as social convention, render impermissible such a noble quest?  And if the Inuit and Sakha actually are exempt from going to Confession on Sundays by virtue of cleaving to other systems…why aren’t you?  On what basis do you not free yourself by simply declaring that you are no longer part of the system that would set you ablaze for lingering a moment too long on a fellow restaurant patron’s exposed legs?  Why does your god care about your actions, but not theirs?
I do not like to agree with people who say things like this, but they do have a point in between all the lightly obscured Islamophobia and outright lies about what their religion has to say about non-cishet people. 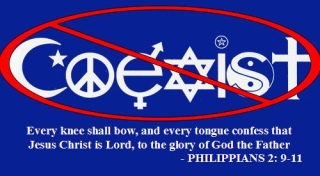 (Nope, Christianity is no threat at all to gay people, no really.  And, of course, all Muslims are sectarian murderers, for serious.)
The encouragement of religious pluralism, the idea that members of different religious groups should be able to live alongside each other without leading to blood and sadness, becomes much more than that in practice.  It is the idea that these proselytizing versions of all faiths must be expunged.  It is the idea that it is always bad form, always gauche, always impolite to promote one’s view or disparage another’s, no matter what either side honestly thinks is riding on being right or wrong about these questions.  It is both a declaration of wholesale hostility against the evangelical, expansionist versions of every faith and a declaration that truth is not a value of this society.
The fact that it would bring me utter squealing delight if the world’s Hare Krishnas and Scientologists felt too embarrassed to accost people in public areas is nothing against the anger and sadness I feel when I realize that too few people care enough about whether the things they believe are true to recognize for what it is the horror show that unfolds when the things that other people believe aren’t true.
Because what people believe affects what they do, and what they do affects us.
And that is where the ideal of secularism, alongside religious pluralism, demonstrates both its necessity and its abject, tragic failure.
Of those who think, honestly and wrongly, that terminating a pregnancy is the same thing as murder, who could possibly vote to give the bearers of uteruses the freedom to make that decision?  Who could check that box and drop that ballot knowing that, in so doing, they have condemned thousands or millions of their fetishized fetuses to a chemical demise and the same number of adults to the “wailing and gnashing of teeth”?  Who could vote to give people the freedom to marry their partners no matter their respective sexes if they honestly believe that doing so not only “enables” the sins of gay people but represents their tacit approval of the same and invokes the wrath of the universe’s master on the entire society that permitted this affront?
We put rules on toy manufacturers to protect children’s eyeballs from plastic projectiles.  A far greater hypothetical harm is averted when people are not permitted to throw their future nirvana away by failing to follow the Eightfold Path.
We vote with our values, and our values derive from what we hold is true about the universe around us.  And that makes secularism—the view and policy that we leave our suppositions about the supernatural at the door when we enter the legislative chamber, executive office, courthouse, or voting booth—both utterly laughable and completely, utterly necessary.
Religions are innately and inescapably hostile to secularism because they affect people’s values.  Secularism only even begins to make sense in an environment in which the versions of all religions that make claims on absolutely anything other than the private behavior of isolated individuals have already died off.  Those that make claims about the nature of the universe, the desires of supernatural powers, or the way in which humans ought to interact impose restrictions on the values that their adherents feel safe holding and, therefore, immediately remove the claim that those values are distinct from those adherents’ religion.  If the goal is to achieve governance free from religious influence, this version of secularism fails miserably, for where can that cordon be honestly and practically placed?
We do not need that secularism.  We cannot have that secularism, not in a world where even nonbelievers can live sufficiently unexamined lives that religious ideas of modesty and purity can remain embedded in their minds.  We cannot have that secularism as long as religion matters to people, even in a world in which pluralism has reached its endgame and all religions have been radically redesigned so that no reasons remain for why it might ever matter which one a stranger holds.
What we can have, what we need to have, is a scientific, naturalistic, informed world.  What we need is an unshakeable commitment to putting the fullness of our accumulated knowledge behind our laws.  What we need is for it to be utterly and uncontroversially implied that, when someone proposes a new law, that it comes with a detailed, comprehensive, well-cited, scientific case that the problem the law is trying to solve exists; that the proposed solution actually solves the problem as it is described; and that the proposed law actually does lead to a better world than the world that doesn’t have this law.  What we need is for evidence to be the standard by which we judge our leaders and establish our politics.  In this environment, religiously-based policy proposals will fail virtually one hundred percent of the time, almost without exception, because what makes them religious is their basis in worldviews that are, almost by definition, nonsensical in the face of the actual evidence at our disposal, and only a flat-out procedural breakdown or an accidental congruence with reality could make them succeed.
This is why I view the promotion of science, skepticism, and indeed atheism itself as a social justice issue, no less important than the standard social justice beacons of opposition to racism, sexism, ableism, and oligarchy.
We do not need secularism.  We do not need freedom of religion.  We do not even need pluralism.
We need truth.
Everything else follows.