[Spoilers for Series 2, 3, and 4 of Doctor Who follow.]
Ania and I watched the new series of Doctor Who a while back.  We never finished it, though.  We had a lot of trouble sustaining interest through Matt Smith’s tenure as the Eleventh Doctor.  Eleven was a cocksure weirdo who spent entirely too much time leading armies into battle while wearing “pacifism” like a badge and not enough doing the things that made us fall in love with David Tennant’s version.
The Tenth Doctor cared so much it hurt. 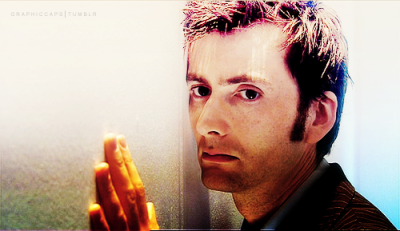 That was Ten’s defining feature.  Where Christopher Eccleston’s Doctor was jaded and sarcastic and Matt Smith’s weird and arrogant, David Tennant’s Doctor roiled with so much concern that one could imagine him quoting Martin Luther King, Jr: “Injustice anywhere [or anywhen…] is a threat to justice everywhere.”  He read into the emotionless Cybermen the horror of their existence and gently eased one out of its misery the only time he could.  He faced eternal imprisonment at the hands of a world-rewriting creative intelligence, and his response was to reunite it with its family to end its desperate loneliness.  The Tenth Doctor extended compassion and even assistance to his most persistent foes, the innately genocidal Daleks, when one of them expressed the apparently sincere desire to rebuild their long-lost species in more humane form.
When a disembodied mind settles in his companion Rose Tyler and she assumes its predatory demeanor, treating the plight of millions of imprisoned, diseased clones as a business opportunity, the Tenth Doctor accuses his hosts of changing her somehow: “She would have cared.”

When Donna Noble hears the psychic song of the Ood, a race with linked minds, she is overwhelmed by its hopeless sadness and demands that the Tenth Doctor re-close her mind to it.  Her sadness is multiplied when she realizes that he cannot so steel himself, and their deafening lament overlays his every thought until they free the Ood from their bondage and they can again sing of joy.
He cares so much it hurts.
Everyone else’s pain is also his.
How does one manage when one feels every jab and twist and reprimand and tease as if it were their own?

I remember the first time my parents were utterly baffled at my emotional state.  I had been reading a spread in a children’s magazine about the state of the world’s frogs, back in New Jersey when my age having two digits was still a novelty.  Frogs then and today face a world made hostile to them by human activity.  Water pollution confuses their hormones and prevents them from growing and reproducing.  Habitat loss takes from them their isolated forests and ponds.  Invasive bullfrogs and cane toads eat their way through smaller species.  A warming, globalizing planet spreads a deadly chytrid fungus to ever more isolated habitats, often eradicating entire populations before they’re done entering science’s catalog.  Fertilizer runoff chokes rivers and lakes with algae, rendering them into anoxic dead zones at night when the plants respire but don’t photosynthesize.  Suburbs expanding into wilderness bring stray dogs and cats to devour whichever local wildlife isn’t poisonous.  I imagined those poor creatures, smaller than espresso cups, all big eyes and sticky hands, heaped in silent piles and plucked altogether from a world that could not tolerate their beauty…and I sobbed.  How could I explain that to them?  How could I share the desolate, quivering empathy I felt for this entire class of animals that could never return the feeling, that held no personal relevance to me, that most people regard as simultaneously cute and gross and would rather have far away from them?  What could they do but hold me and tell me that it was all going to be all right, without understanding what it was, without even knowing what worry and sadness they were trying to reason me out of, taking with them forever their utter bafflement that that situation had even transpired?

They should have known then that I’d be an activist by disposition, no matter how misanthropic I would later become.

Compare that to a few years later in Miami, when my family watched G. I. Joe: The Rise of Cobraand Shana “Scarlett” O’Hara offers this bouillabaisse of Straw Vulcan talking points:

“Attraction is an emotion.  Emotions are not based in science.  And if you can’t quantify or prove that something exists, well, in my mind… it doesn’t.”

And a family member who will go unidentified looked back in cognizant delight and told me, “She’s just like you, Alex!”

I cried at the end of every plot arc in Clannad.  I cry at the end of Mary and Max every time I watch it.  The end of Alex and Emma brought me to tears.  I held together only a little longer than my father did at my grandmother’s funeral.  Eric MacDonald recited to us, “There, now you have a country” and I lost it on the spot.  My old LiveJournal is full of melodramatic teenage pathos.  They have seen me cry during movies.  They have seen me cry about breakups.  They have video of me barely keeping the tears back long enough to make my speech at my sister’s quinceañera.
I can’t be around crying people for very long or I join them.
But to them, I’m a stoic man-monster, a machine with no ghost, a Cyberman with no capacity for human responses…because I’m a science-minded atheist, but also because I keep my space organized and I start to shut down in excited, crowded rooms and everything and everyone is too bloody loud and I need to manipulate something in my hands when I’m nervous.
When it hurts you more than you can stand to know that you’ve made someone else’s pain worse, you don’t take risks to try to make it better.
When even being around someone who is hurting is enough to make every twinge and spasm and shouted invective yours as well as theirs,there is only retreat and quiet and locked doors.
When you feel so much that you can’t process it all, it looks a lot like you don’t feel anything.
The Doctor was there to shut out the Ood’s sad song and give Donna the mental peace to function again.  But no one is there for the Doctor.