A few years ago, I participated in one of the Facebook status games. The point of the game was to reveal something about yourself, something that some people might not know or that you think they should know. Among the list, I included that I struggled with fairly severe body image issues. A friend of mine responded that she was surprised to learn that because she always believed me to be very confident. Since I have a tendency to hide my body, even as a nudist, and a tendency to show discomfort around my appearance, I was quite surprised to learn that she believed me to be confident. I asked her why she thought so and she replied: Yours always posting pictures of yourself.

As a culture, we’ve created this idea that selfies are a sign of vanity, and we are terrified of vanity. So much so, that we have built an entire culture predicated on teaching everyone to hate their appearance. We create impossible standards and then tell everyone that regardless of circumstance we must achieve it and maintain it. We’ve so thoroughly pervaded our social bias towards people who fall outside the “acceptable standards of beauty” that we as a society no longer treat them as fully human. Perversely, in an attempt to avoid the appearance of vanity we have instead created a cultural obsession towards an obsessive hatred of one’s self.

Ultimately, that is all that vanity is. It is an appreciation for one’s own appearance. It is a love for what you see when you look at yourself. It is a comfort in your own skin. Yes, excessive vanity can be dangerous, just like excess in anything is dangerous. But vanity, by itself? It is an act of self-love.

But selfies? They’re not an expression of vanity, they are a lifeline that reminds myself that I am not worthless. That I am not hideous. It is what allows me to replace my internal image of myself from one of loathing to one of acceptance. Because I don’t love how I look. I hate it. I can’t look in the mirror without desperately wanting to cut off some pieces of myself. Without wondering how anyone can possibly be attracted to me, and wondering if every sexual interaction I’ve ever had was a lie. My body, my appearance, was the weapon used to cut at my psyche over and over and over again. I was told it was the reason I was alone.

Those words, those cuts to my self-esteem are part of the reason why I let myself be taken in by users and abusers when I went out into the dating world. It was the excuse for every negative interaction with people I was interested in. They’re the reason that I sat like this, to avoid my rolls showing up through my shirt, because then people would think of me as fat. 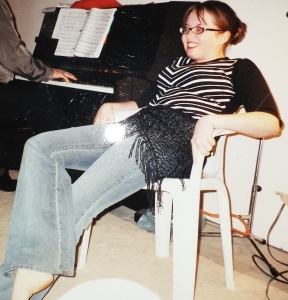 It is what made me think for years that the girl in this picture was fat. 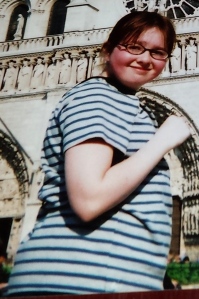 Then I figured out that if I was careful I could take pictures that highlighted the few things that I do like about myself. The contrast of my features against my sk 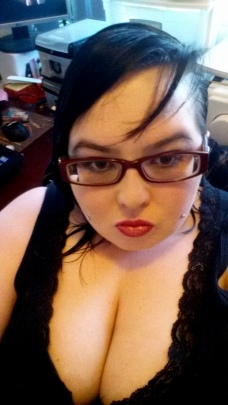 in, the darkness of my hair, the colour of my eyes, all things I could appreciate about myself. They were things that let me believe that I had value, that I was worthy of love. Especially in this world that goes out of its way to tell me the opposite. These pictures, these pictures that are used to mock my vanity, to mock the very hutzpah of daring to love even the smallest part of myself when I am so far from perfect. Because how dare I. How dare I? 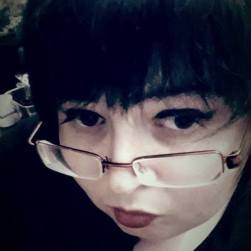 How dare I look to myself for validation when the world teaches me that I should rely on the approval of men, regardless of whether I have any interest in their approval. How dare I not be grateful for the compliment that men deign to bestow on me, regardless of whether I want them, or whether they make me feel unsafe and like a target. The one that tells me that I am never allowed to refuse an advance because I’m ugly and so they are doing me a favour my being with me and tells me I am not allowed to have standards.

So no, I don’t need you to tell me that I am pretty. Because I have my selfie, so that I can tell myself what I need to hear.

Because that’s what they are. They’re selfies, and they have nothing to do with you.