For the last several months, I have been dealing with increased Crohn’s like symptoms: an increase in pain, in nausea, and in extreme exhaustion. All the tests however are coming back normal. It’s possible that one of three things are going on:

The doctor’s advice was for me to “take it easy” in the hopes that less stress will mean less symptoms. This is especially the case if the bulk of the symptoms are the result of the IBS. The problem of course is that in terms of stress, I am already on disability. I don’t work in the traditional sense, though I would argue with anyone who would try to say I don’t work. (Ever try to make 70 hats in under a month? Ever write a book?)

Most of my stress comes from the poverty that comes with being on disability. I live on a fixed income that was fixed long enough ago and hasn’t accounted nearly enough for inflation. I live on an income that depends on me having to make additional money but not so much that they start docking my support. My anxiety fixates on things, sometimes legitimate and sometimes not. In addition my depression sets off my anxiety.

If I can’t actually make more money and money is the leading cause of my stress, and I’ve already done as much as possible to relieve other forms of stress, what else is there?

I’ve looked at the problem extensively, and a thought emerged. You see, whenever I am around someone’s anxiety service dog that dog responds to me in a way indicating that they want to alert me. More than once, I’ve been alerted to an anxiety spiral by a dog on multiple occasions. When that happens, my sudden awareness of what is going on helped me work on therapy techniques to draw me away from the spiral.

It makes sense. When you live in a circumstance where some measure of nervousness and worry is justified, how do you differentiate regular worry from pathological anxiety?

For some time now, I had been considering the possibility of a service dog. The biggest barriers always seemed like a lack of easily accessible information, and an assumption that the costs would be prohibitive.

Then a little bit of luck came my way. I met a wonderful person who not only had an anxiety service dog, but had gone through the process herself. Her animal is what is called an owner-trained service animal, a designation that is not allowed in some places but luckily is in Ontario. Now, I am still learning what there needs to be learned, but I can say that an owner-trained service dog is NOT a fake service dog. It is simply one who was trained by the owner rather than by a specific program however, they both need to meet the same level of qualifications.

This person was willing to help me and let me know how to go about it.

With the consultation of my friend, and the pressure from my increasing symptoms, it seemed as though we were being pushed in that direction. In addition, our dog is starting to age and it getting to the point where a younger companion could do a lot to keep her in good health and extend her life. The final decision was aided with a promise from my parents to help with some of the costs in the form of a Christmas present.

We decided to give it a go and early this week we welcomed CJ (After CJ from West Wing) to our family.

Our choice of breed was dictated by a series of considerations:

All of these considerations pointed us to a small dog. Toy breeds are also very attuned to humans since they grow up in much closer contact with people than other breeds.

My friend helped me administer a temperament test more than once, one based on one of the recognized assessment tests out there.

I will be writing about the process while I go through it. But first…. Puppy pictures! 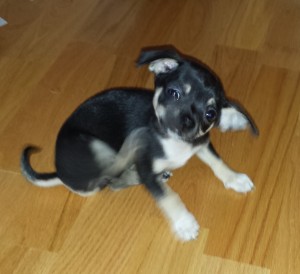