The last session in my dissection course is a two-part dissection of a pig and a frog.  This one goes into much greater detail than any other dissection in the course, so there’s rarely time for a protracted video presentation at the end.  Still, I keep a good selection of surprises for my students.

One of the emphasized themes in this session is the difference between male and female reproductive anatomy, which is prominent in the pig and invisible in most of the other animals this course examines.  For students careful and lucky enough to get a pig with intact and clearly visible reproductive ducts, it’s a chance to compare the fairly obvious female path to the unnecessarily convoluted male path.  The version of the mammalian reproductive system that contains a uterus is fairly straightforward at the level of detail visible in a preserved specimen: the reproductive tract connects the gonads in the body cavity to the exterior opening through the pelvis.  In the other version, though, the relative positions of the opening (now at the end of a penis) and the gonads (now in a scrotum) are reversed.  Rather than simply passing through the pelvis in the other direction or connecting through the body wall without passing through bone, though, the ducts that connect the testes to the penis pass through the pelvis three times on the way there.  Effectively, the testes and tract opening moved from the ancestral vertebrate locations, but the tubes simply extended to meet them at their new locations, creating one extra pass with the movement of the testes and a second for the penis.  This is less evident in humans, whose penises are less removed from the relevant location.

That’s just an interesting side note I’m instructed to explain toward the end of the dissection, when the students have already removed the digestive organs to reveal the structures beneath.  More importantly, it primes them for my opening video.

Many of my students have relatives in farming, but they might not realize that most large farms rely on artificial insemination for their animal-breeding needs.  Maintaining particular breeds for the highly standardized modern market is often prohibitive without such methods.  The problem is that this is still tied in with the sexual biology and behavior of the animals, much as the production of new plants by artificial means still has to address their wild roots, and so introduces some complications.

A few decades ago, human sexologists introduced the “upsuck theory,” the idea that the biological function of the female orgasm is to induce contractions that pull semen into the cervix and thereby increase the odds of fertilization.  As it turns out, this theory isn’t true for humans, but it is true for pigs.  There is a measurable increase in the number of piglets in each litter if the mother-to-be experiences an absurdly long orgasm when the semen is introduced.  Farmers are increasingly aware of this, as this Danish farmer demonstrates (skip to 11:22).

To maximize his next litter, he must emulate the actions that a boar would take prior to and during insemination, including manipulating the sow’s nipples, applying force to her sides, climbing on her back, and stimulating her clitoris.  Given that pigs have the decidedly convenient arrangement of a clitoris that is within the vagina, this means he has to get his fist in there before administering the bagged semen.

If you’re curious how it was determined that the upsuck theory is true for pigs but not true for humans, well…you’ll just have to watch the rest of Mary Roach’s brilliant presentation, or read her book.

Primed to find pigs far more interesting than they probably ever did, my students are thereby ready to encounter the babirusa.

The babirusa, a wild pig from Indonesia, is like many wild pigs in that it has very prominent tusks.  What makes the babirusa different from other wild pigs like the warthog is that its upper tusks, instead of coming out of its mouth like other pigs’, grow backward through its skull to exit the roof of its mouth and curl around toward its forehead.  Particularly old males have tusks that curl all the way around and start pointing forward or threaten to penetrate their braincase, but few reach that age.

A tour of the mammals would take far too long, so I usually switch gears here to visit the other amphibians.  Getting acquainted with whales, antelopes, and wolverines is typically far easier for my students than encountering the more exotic kin to their American leopard frog.  The one least familiar to most students is almost certainly the caecilian.  Caecilians are the third order of living amphibians, next to the frogs and salamanders.  Unlike their kin, they are limbless, superficially resembling earthworms right down to their annulated skin and loss of the chordate tail (so that their bodies end at their anuses).  Many species live in burrows and feed on earthworms, while others are aquatic.  Many of them give live birth, as seen here.

Note the large membranous gills, which keep the caecilian breathing until it escapes its mother’s body and takes its first breath of air.

Note the comparison between the weight of this behemoth and a small child.  The giant salamanders are three in number (one species each in China, Japan, and the United States), and the first two are critically endangered because of pollution and light fishing.  Obligately aquatic animals from very clean, very cold mountain streams with an extremely low metabolic and reproductive rate, they are vulnerable to environmental disturbances.

While many other salamanders are extremely pretty… 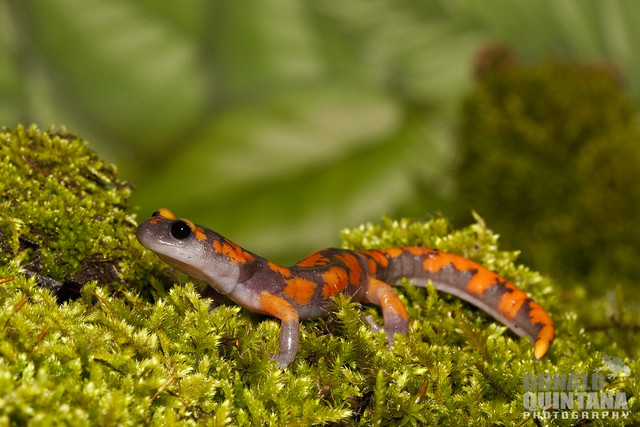 …one combines being gorgeous with being kind of terrifying.  The Spanish ribbed newt doesn’t look like much at first.

Those red spots on its sides are venom glands.  When the Spanish ribbed newt is grasped, it tenses its back to push its ribs through its venom glands, through its skin, and into the flesh of whatever is grasping it.

This animal turns its ribs into fangs.
That’s still not as macabre as the animal evocatively known as the “horror frog.”

Most of the time, the Cameroon hairy frog’s claim to fame is that males develop hairlike skin extensions that enable them to breathe underwater for much longer than normal, a skill that features in their mating behavior.  Their other notable characteristic, however, is that, when a hairy frog is threatened, it actually breaks the last bone of its toes to create a sharp prong of bone that breaks through its skin to create claws.

Frogs can’t normally have claws because they lack the accumulation of keratin glands at the base of the last finger segment that characterizes reptiles and mammals, and many frogs additionally have a cartilaginous extra segment that holds their suction cups.  The Cameroon hairy frog’s response to that was not to develop poison or speed, as most frogs do, but to find an altogether different source for claws.
Frogs are also a fantastic place to look for unusual reproductive biology.  A perennial favorite is Darwin’s frog, which is severely endangered.
When a Darwin’s frog lays eggs, the male fertilizes the eggs and guards them until they hatch.  He then takes the tadpoles into his mouth and broods them in his vocal sac, where they feed on their yolk and on secretions from the inner lining of the sac.  When they have metamorphosed into froglets, he releases them.  Throughout this time, he does not eat.  This pattern is also known from the Australian gastric-brooding frog, which actually brooded its offspring in its stomach, but that frog is confirmed extinct.
And yet, there’s a weirder frog strategy.
The Surinam toad, a tongueless aquatic frog from South America, keeps her eggs safe by spreading them on her back after they are fertilized.  Her skin then becomes highly vascularized and grows over her brood, keeping them safe until they have gone through their entire metamorphosis.  When the froglets are ready to emerge, the skin becomes thin and porous and they break out dramatically, as seen here.
But it’s not all grotesquery and slime with amphibians.  There is also lighthearted cuteness.  This owner of an African bullfrog, Pyxicephalus adspersus, decided to challenge it to a game of Ant Smasher, with predictable results.
African bullfrogs are aggressive predators that, at larger sizes, do not hesitate to eat mice.  They have teeth in their upper jaws, like most frogs, and can inflict surprisingly unpleasant bites, which they are wont to do when someone gets between them and some insect treats.
This one, I don’t show to my students, because the system on which I show videos doesn’t transmit sound from the Internet for whatever reason.  But I’m including it here to share it with my readers.  This microhylid frog, the Namaqua rain frog, lives in the desert regions of southwestern Africa and emerges from estivation only during heavy rains.  This way, it escapes the desert heat and desiccation.  And it makes the cutest sound.
I’m usually running out of time by this point, but if I’m not, I add some reptile videos to the mix.  And because I like to give my students nightmares, I show them these three squamate species that have developed impressive gliding ability, to the point that people call them “flying.”
The flying gecko:
The draco lizard:
And the flying snake:
The flying gecko uses the flaps of skin on its sides, tail, and feet to glide as it jumps, in the same manner that a flying squirrel or colugo takes to the air.  The draco lizard is much more specialized, spreading wing flaps supported by its ribs that it can fold for storage.  The flying snake flattens its entire body into a sort of wing as it slithers through the air.  None of these achieve true flight, as none of them can stay in the air under their own power, but this gliding action enables them to disperse much more widely than many of their kin and to evade predation in ways their attackers don’t expect.
Speaking of unexpected ways to evade predation…
…the horned lizard (sometimes erroneously called the “horned toad” because of its squat, rotund physique) has what is probably the most bizarre defense mechanism in the animal kingdom.  The lizard is a desert species that specializes in eating ants, so its body is heavily armored down to the eyelids.  This isn’t enough to save it from much larger predators like coyotes, though.  That vulnerability is compounded by the peculiar limb anatomy of amphibians and most reptiles, which lack dedicated muscles for moving the lungs and therefore cannot breathe and walk at the same time.  A running lizard has to take breaks to take breaths, a death sentence against determined mammalian attackers across terrain with few hiding places.  When it is exhausted or cornered, the horned lizard’s last-ditch means of repelling attackers is to dramatically increase the pressure of the blood in the lining of its eye socket, bursting a vessel and directing a stream of blood up to a meter away with startling accuracy.
This blood isn’t toxic or foul-smelling and is perfectly ordinary lizard blood in every respect, but it makes coyotes and other predators saunter off defeated anyway, as though the sheer bewilderment they must experience at an animal trying to scare them away by squirting blood out of its eyes is enough to make them want less confusing prey.
I could go on with examples like this more or less indefinitely, but I tend to find this animal a satisfying coda to a semester spent bringing my students all of the enthusiasm I can about the weird and wonderful animals of this world, so I try to leave it here.  Time rarely permits a larger assortment anyway.